skip to main | skip to sidebar

This is The Sheep. Iggy says it should be called Minty, which I'm sure probably isn't very nice. 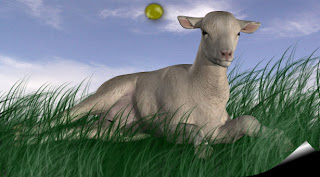 Anyway, Mr S informs me that all it seems to do is eat and poop. Nothing at all sinister has happened, nothing even vaguely shocking. Oh, except for the smell, it certainly shocked me. I'm not sure it was the sheep though because Mr S went strangely quiet as it wafted past, which is quite unlike him.
I don't know much about sheep. I think I'll do some research, that way I'll be ready for it's attack. It's my turn for watch duty in a moment so I'll have to go. I'll let you know how it went tomorrow. Oh, I said I'd tell you about Tabitha... I don't have time now so I'll dig out a picture for tomorrow and tell you about her then as well!

The ramblings of The Maybe Girl scrawled at 16:28
Labels: sheep, shock, watch

Nice to see you back, Fluffy!

It's good to be back, I just have to make sure I don't set fire to anything. Iggy is quite fussy about melted keys for some reason.

Loud and proud, a pet with attitude!

Want to add me as a friend to your Myspace or Facebook? Now you can!

Pages to see - About Writing